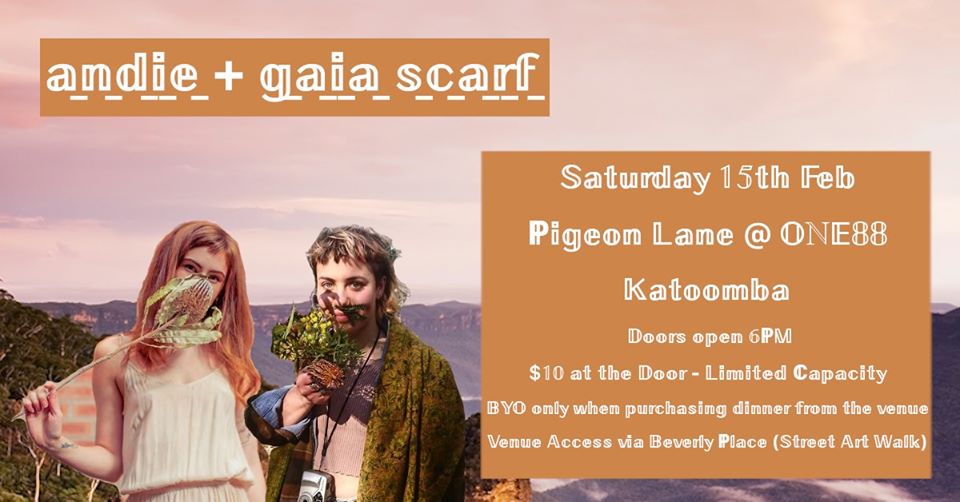 Slinking into old school jazz and 90’s soul jams, she uses complex chords, time signatures and syncopation to create dreamy flowing soundscapes, for you to be lulled into before she yanks ya right back out with her abrasively honest lyrics and obnoxious kazoo solos.

In August of 2017, she was invited to travel to New York for a few weeks to perform two house concerts with the international organisation ‘Sofar Sounds’, solo at Rockwood Music Hall and at every jazz jam night she could find, often at 55 Bar in Manhattan, with the likes of Kimberly Thompson and Aaron Burnett.

At the ripe old age of 23, Andie is launching her fourth release “the tiny album” which is her third successfully crowdfunded release.

She looks forward to touring regionally across Australia in her newly self-converted school bus, pursuing her passion of sharing her music with intimate audiences.

Hailing from the Blue Mountains, Gaia Scarf is a fresh and captivating addition to the Melbourne music scene. With evocative and atmospheric electric guitar interwoven with her vulnerable yet powerful voice, Gaia is transparent in her expression as she speaks on identity, love, society and her personal human experience.

She melds vocal stylings from RnB & Soul, lyrical influence from story-telling and guitar from both Folk and Jazz , to meticulously craft her unique and memorable sound.

Between 2015-2018, Gaia made up one third of Blue Mountain’s based Folk trio ‘Snail’. They played around the festival circuit at events such as Blue Mountains Folk Festival (NSW), National Folk Festival (ACT) and Fleurieu Folk Festival (SA), before taking a break to focus on new and upcoming projects. Gaia has since been embracing her life as a solo songwriter and performer in Melbourne and has been welcomed with open arms into the vibrant music scene of the Northern suburbs, playing events with acclaimed artists such as Laneous, Ha Na, Natalie Slade, Danny Ross and many more…

In between regular gigs, Gaia is currently working with her band and producers to record her debut EP to be released in 2020.