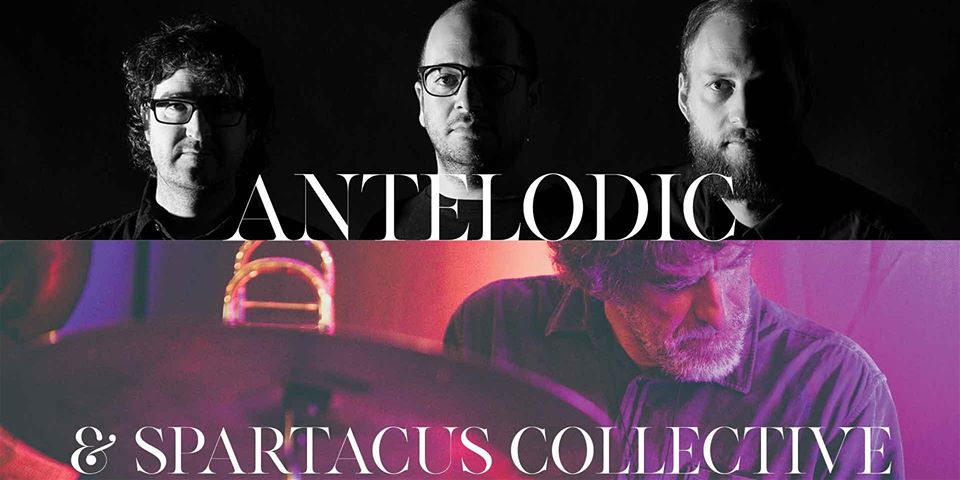 POSTPONED – WILL BE RESCHEDULING FOR LATER IN THE YEAR
In 2019, guitarist/composer Robbie Melville won the Instrumental Category of the International Songwriters Competition, against 19,000 others, judged by none other than Tom Waits. In April 2020, Melbourne-based trio Antelodic (led by Melville) celebrate the release of their second album, ‘To Iceland! To Iceland!’ (ABC Jazz) with a national tour, joined by drummer Ronny Ferella’s Spartacus Collective, and live visual artist Jean Poole.

Antelodic:
Antelodic is an instrumental chamber jazz trio formed in 2012 and led by guitarist Robbie Melville, winner of the Instrumental Category of the 2018 International Songwriting Competition. Featuring the unusual instrumentation of guitar with two saxophones (and occasional clarinet and flute), the woodwinds – Gideon Brazil (tenor saxophone) and Monty Mackenzie (alto saxophone) – often perform the role of rhythm section, allowing the guitar to become the melodic voice. The trio have developed a highly nuanced approach to their creative practice that allows them to experiment in the moment while maintaining a unified ensemble sound. The music combines meticulously arranged, densely notated compositions with moments of improvisation and sound sculpting, reaching beyond the traditions of both classical and jazz to create a style very much of its own. Critics have often noted its cinematic quality.

Antelodic released their debut album ‘Quiet Sufficient’ in March 2017. The majority of the album was written in a six-month period following the birth of Melville’s second daughter. This time of joy and introspection, combined with the necessity of quietude, resulted in an album of gentle, restrained reveries. Several of the pieces on the album deal with pivotal events in Melville’s private life, including the passing of his beloved grandmother. Other themes are inspired by musical heroes Stephen Foster and Richard Rodgers, the turning of the seasons, and the simple joys of friendship. The album’s cover is an image by Czech photographer Viktor Kolář.

Following the release of the album, Antelodic were invited to perform at the 2017 Wangaratta Festival of Jazz & Blues. Their show, situated in the ethereal acoustic space of the Holy Trinity Cathedral, was recorded by the ABC and featured on ABC Jazz.

During the latter half of 2018, Antelodic’s ‘Spring Thing’ tour travelled throughout regional Victoria, performing in independent art galleries, bookshops and churches, promoting their debut album and “road testing” new material.

The trio returned to the studio during the closing weeks of 2018 to work on a second album. Recorded in Melbourne’s ABC Studio 345, the forthcoming album, ‘To Iceland! To Iceland!’, features another collection of Melville’s compositions, and also includes an arrangement of the Icelandic hymn Heyr Himna Smiður. Considered, mature, honest and deeply personal, ‘To Iceland! To Iceland!’ celebrates life and honours those we have lost along the way.

“There is a translucency to these compositions that is quite mesmerising. Monty Mackenzie and Gideon Brazil seemed to revel in the technical and tonal demands required to achieve the subtlety and grace demanded by Robbie Melville’s compositions” – Paul Simmons

Spartacus Collective:
Spartacus Collective is a quartet of solo drumset with instrumental accompaniment. A combination of written notation and improvised material is utilised to put the drummer in the solo spotlight. Conceived by drummer/composer Ronny Ferella this project flips the traditional roles of the usual instrumental hierarchy and highlights the drumset as a tonal instrument that can adapt to the requirements of the music on hand.

Parking @ The Boilerhouse:
The Hydro Majestic Hotel has onsite parking right next to the Boilerhouse . . . and it’s free!

Dining @ The Wintergarden:
Why not have dinner at The Hydro Majestic Hotel before the show? Experience the gourmet delights with dinner in the Wintergarden which showcases the fresh seasonal produce sourced from local suppliers in the Blue Mountains area. Enjoy our chef’s selection of entrées and desserts along with our selection of mains. Our dinner menu allows the Hydro Majestic to provide you with a unique regional dining experience. Call +61 2 4782 6885 or book online.

Dining & Drinks @ The Boilerhouse:
A full bar, featuring regional beer, wine and cider, and a light tapas menu is available to order at The Boilerhouse during all ‘Live @ The Boilerhouse’ shows. Check out what’s on offer by heading to – http://www.hydromajestic.com.au/images/PDFs/LiveThe-Boiler-House.pdf

The iconic & revitilised Hydro Majestic is open and offers event space, dining options and accommodation. Bookings are now being taken.

The Hydro Majestic Hotel has a history and a mythology that follows the map of our nation from Federation and through two world wars to present day. Now, the long awaited opportunity to peel back its layers and rediscover the essence of the most famous historic holiday resort in the Blue Mountains has arrived.

The ‘Hydro’ is scheduled to open in two stages, with stage one of the public areas to be opened on the 31st of October 2014. Past glories, architectural and design aspects, and lost atmospherics will be revived and rediscovered, while a touch of the here-and-now is set to take the building into the future.