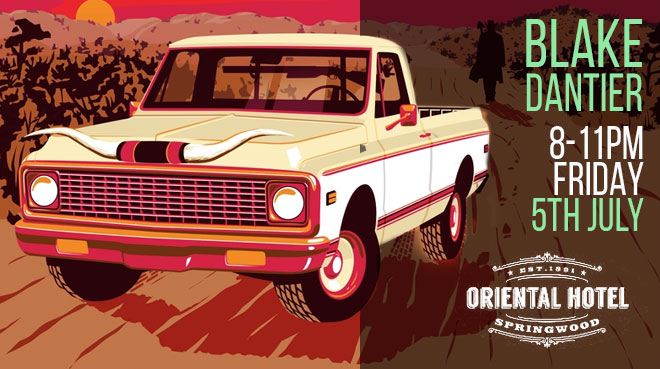 In this day and age music has no geographical boundaries…
For Australian singer-songwriter Blake Dantier this meant he didn’t have to grow up in the down-home American south to fall in love with Country Music. In fact he was a teenager thousands of miles across the pacific ocean in a tired Western Sydney suburbia when he first heard it.

If Chris Stapleton lit a joint with Alan Jackson and started jamming, then out of that haze you may catch a whiff of what Blake Dantier is about. As a songwriter, singer and multi-instrumentalist he paints his world onto a canvas of rolling bass lines and crying pedal steel guitars. At the centre, his twangy vocal invites you for a closer listen to these ballads of desperation, drugs and heartbreak.

It wasn’t until he was 17 that Blake first discovered country music. Relatively late to the party, he had some catching up to do. He attended the CMAA’s Academy, where he received his ‘country music 101’. Following that, a two year long binge of music ranging from Hank Williams, through to the 70s outlaws and up to the ultra-modern sounds of Keith Urban sculpted his songwriting. Inspired by the timeless themes, gritty lifestyles and honky sounds of Country music, Blake emerged with a style faithful to the genres roots whilst equally at home with today’s Alt-Country rockers.

With a magnetic live show he has crossed state lines, performing everywhere from small local stages to festivals like the Gympie Muster and the Tamworth Country Music Festival. He recently took out the top spot of the Country Music Stampede’s ‘Maton Rising Star’ talent search – scoring him a trip to the county music mecca, Nashville, TN. His songwriting also received accolades at Tamworth this year, as he was presented with a song of the year award from the Tamworth Songwriter’s Association. Now his punchy new single, Mary Jane, is making waves on Australian radio. Produced by Australian heavyweight, Shane Nicholson, the energetic debut highlights Blake’s witty songwriting and unique soundscape.

Late 2019 will see Blake begin work on his next release. Blurring the lines between alt and neo traditional country, it’s a collection of bittersweet stories anticipated to be a breath of fresh, nostalgic air – Taking you back to Country music’s tender roots before ripping them out and rewriting the story.