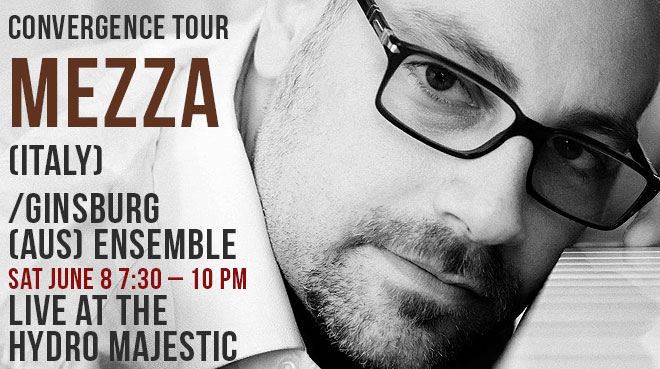 ‘Convergence’ is the collaboration between award-winning pianist Vittorio Mezza (Italy) and jazz saxophonist Mark Ginsburg (Australia). Akin to two worlds slowly closing in on each other – occasionally clashing, at times overlapping – their music is a beautiful combination of haunting ballads, slow-burning mood pieces and pulsating passages. Described by The Sydney Morning Herald’s John Shand as “a magic-carpet-ride sense of airborne ease”, don’t miss the opportunity to catch these incredible Internationally touring musicians over the June Long Weekend!

“The shortest distance between two points”, Archimedes wrote, “is a straight line”. Music, however, is rarely about finding the shortest distance. The curved and winding trajectories of Vittorio Mezza and Mark Ginsburg’s collaboration would certainly prove to be far more exciting and fruitful than any straight line ever could have been. For them, making music is about allowing contrasts to blend into something new, it is akin to two worlds slowly closing in on each other – occasionally clashing, at times overlapping.

After a triumphant tour through South Africa in 2016, Convergence marks the second milestone of the duo. It documents a long exchange between two personalities with highly individual backgrounds: Italian pianist Vittorio Mezza, an accomplished jazz performer with strong classical roots and a love for Mediterranean life. And saxophonist Mark Ginsburg, who was exposed to ancient cantorial prayer modes in his youth alongside the rhythms and sounds of South Africa.

These differences were undeniable. But Mezza and Ginsburg simply focused on what united, rather than what separated them: Their musical tastes, shared a sense of beauty and the importance of family. Thanks to these ideals, this collection of ballads, slow-burning mood pieces and pulsating ensemble passages has turned out sounding remarkably unified.

“Distance is not for the fearful, it is for the bold.”, author Meghan Daum once wrote. And it certainly took a lot of faith and courage to pursue with the project. It goes without saying, then, that Convergence is much more than just a studio album. It is an ongoing exploration of what is possible in collaboration and how to grow not just as musicians but human beings as well. This dialogue could potentially go on forever: Like an inspired conversation, the convergence of ideas never stops, becoming deeper and more intimate, forever expanding in scope and diversity.

Released in September 2018, the album has received wide-spread critical acclaim and was recently announced as one of three finalists in the US based Indie Acoustic Project’s “Best Albums of 2018”.

The Mezza / Ginsburg Ensemble has toured in South Africa, and in Italy, where the album was recorded. Their first Australian tour features the stellar rhythm section of Tim Firth (drums) and Karl Dunnicliff (bass).

“The spirit of music married to the spirit of jazz….5 stars” – Bruce Cassidy, Blood Sweat and Tears

Parking @ The Boilerhouse:
The Hydro Majestic Hotel has onsite parking right next to the Boilerhouse . . . and it’s free!

Dining @ The Wintergarden:
Why not have dinner at The Hydro Majestic Hotel before the show? Experience the gourmet delights with dinner in the Wintergarden which showcases the fresh seasonal produce sourced from local suppliers in the Blue Mountains area. Enjoy our chef’s selection of entrées and desserts along with our selection of mains. Our dinner menu allows the Hydro Majestic to provide you with a unique regional dining experience.
Call +61 2 4782 6885 or book online.