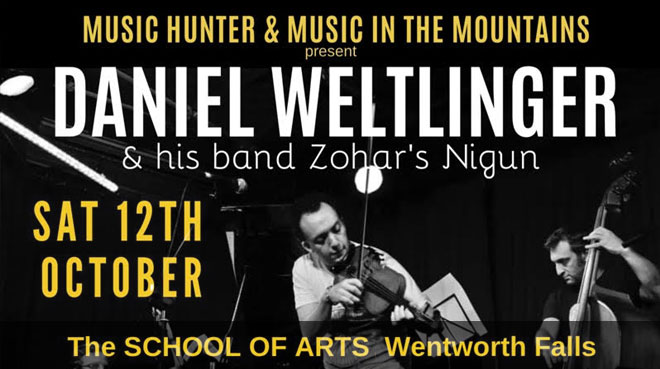 ‘This is the one he’s been working towards. This is the one where the violin sound flows like thickened cream; where the programmatic ideas and the purely musical ones are in complete accord..’ – John Shand, Sydney Morning Herald, 26. July 2019

‘Szolnok’ is an album that was recorded with and traces in music the true story of Daniel Weltlinger’s grandfather’s violin from Szolnok that was carried by foot from Hungary to France between 1920-1922.

The violin was literally carried across the entire globe – from Budapest to Vienna to Marseilles to Casablanca to Sydney to Berlin – and the album consists of a mix of mostly original material mixing jazz, classical, folk and free improvised music influences as well as songs that Weltlinger’s grandfather played on the violin.

The album follows the historical line of this instrument and it’s whereabouts until the present day, and represents a story about time, continuity and most importantly about moving forward. It is a story for the ages.

“It is impossible to overstate the charm of this album. In every sense of the word it is a fabulous music journey. The violin sings in the hands of Daniel Weltlinger like no other..” – Peter Winkler, The Music Trust, 28. July 2019

Berlin-based violinist and composer-producer Daniel Weltlinger presents his critically acclaimed new album release ‘Szolnok’ along with Zohar’s Nigun (Daniel Pliner – piano, Simon Milman – bass, Robbie Avenaim – drums/percussion). The remarkable true story of Weltlinger’s grandfather’s violin from Szolnok, that was carried around the world from Budapest to Vienna to Marseilles to Casablanca to Sydney to Berlin and beyond.

‘Zohar’s Nigun is composed of four gents who not only ply their instruments in a rather unique exposition of traditional and modern modes but who also explore the ethnic and cultural wherewithal which, in this case, generated the Jewish/Yiddish tradition. The Four Questons is in fact the most progressive application of distinctly Yiddish style I’ve ever heard, yet, while spinning the ancient mode out to its farthest reaches, they also manage to preserve its essence and, in doing so, pay lavish tribute to the genius underlying.’ – Mark S. Tucker – FAME review

Widely acclaimed for his distinctive warm sound and innovations within the genres of Gypsy-swing, jazz, Yiddish-klezmer and experimental/free-improvised music, Daniel Weltlinger has performed and recorded in Australia, Europe, China, Morocco, Turkey, the US and Israel, and regularly collaborates with many renowned artists and ensembles including German-Sinti guitarist and composer Lulo Reinhardt along with members of the Reinhardt family based in Koblenz/Rheinland Pfalz, Berlin based Yiddish singer/actor Karsten Troyke, the multi-ARIA Award-winning Gyp-rock band Monsieur Camembert and the Turkish-Classical Ensemble Olivinn amongst many others. He runs the independent record label Rectify Records, which produced the album ‘Koblenz’ nominated as amongst one of the best albums of 2015 in Downbeat Magazine, which also produced the widely acclaimed album ‘The Four Questions’ by Zohar’s Nigun released in 2012. Zohar’s Nigun is an experimental-chamber-jazz project that explores the very essence of the complicated and fractured nature behind what shapes identity in the 21st Century using the analogy of four musicians of Jewish heritage who mix both original and traditional music to explore these concepts. Shalom!

‘It is no surprise that Daniel Weltlinger’s highly developed musicianship and beautifully warm violin tone are now in demand in international projects at the highest level.’
Peter Winkler – Music Trust Online, April 2, 2017