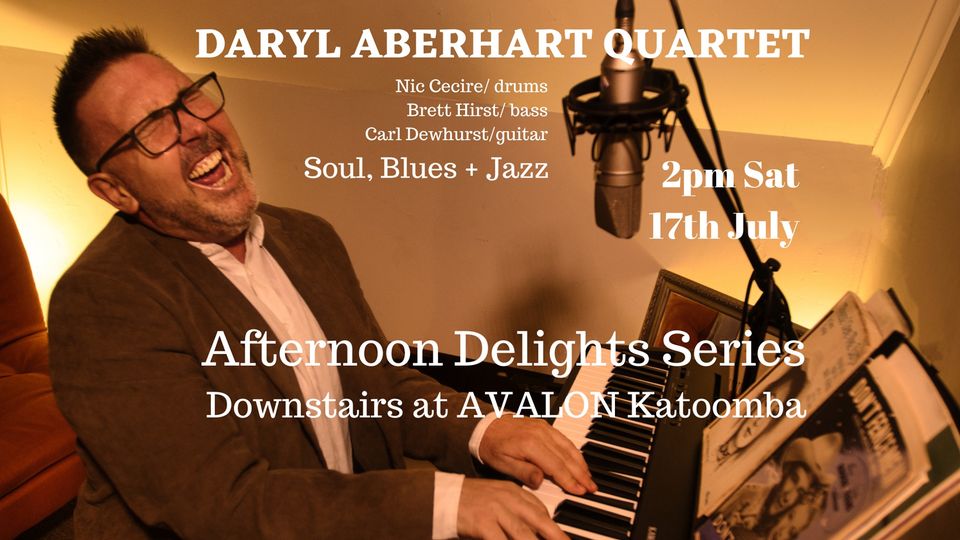 Saturday, 17th July 2PM-4.30PM
DOWNSTAIRS Avalon, 18 Katoomba St,
1st set starts 2.30pm sharp
Tickets $40-Intimate venue- 35 seats only
DINE AND DISCOVER VOUCHERS ACCEPTED if received before June 30.
Craft beers, local wines + sweet & savoury dishes
​
One of Australia’s most talented jazz/blues/vocalist/songwriter/pianists, Daryl Aberhart is celebrating the release of his latest album Shake These Blues Away.
Daryl has played at many of the great Australian jazz and blues festivals over the years.
After something of a creative hiatus dude to his’ last decade being spent predominantly as a tertiary educator at the University of Newcastle tutoring in voice, piano and songwriting, Daz is back with a cracking new collection of tunes, and a killer band comprised of not only his all-time favourite rhythm section, but with one of his favourite local guitar legends as a cherry on the top.
Featuring:
Nic Cecire/Drums: an incredibly versatile player with a signature sizzle to his swing and a serious snap in his groove. During his illustrious career to date, Nic has worked, (and continues to work regularly) with a veritable who’s who of Australian jazz, rock and soul/r+b artists. Nic is also one of Sydney’s most in demand teachers, and is a long term member of the tertiary education team at the Australian Institute of Music in Sydney.
Brett Hirst/Bass: In terms of a stellar music pedigree, just like Nic, throughout his extensive touring and gigging lifetime Brett has worked with many of the greats in both the local jazz and pop scenes, with musicians such as Mike Nock and Lior seeking out Brett as their bassist of choice. A perfect fit for an artist such as Daz with his eclectic mix of styles and influences, Brett always knows exactly what’s required, and serves it up just right up, every single time.
Carl Dewhurst/Guitar: A true musical chameleon. Among the Australian community of improvising musicians and listeners, Carl is is renowned for being equally at home playing free-jazz, sumptuous standards, rockabilly, blues, soul, funk or anything you can throw at him really, and he can pull it all off with style and flair in a truly authentic way, yet with his own distinctive and compelling voice always shining through. In addition to being a highly in-demand musician and educator, Carl is also involved in many of his own performing and creative projects as both an instrumentalist/composer and a singer/songwriter.
You can expect to hear not only the entire new album Shake These Blues Away played cover to cover, but also some of Daryl’s favourite grooving tunes from his’ John Scofield with vocals project The Cat Within (2007).
You will also be hearing the first ever performance of some of the brand new tunes Daz is currently writing for his next blues album (working title In It For The Long Haul)