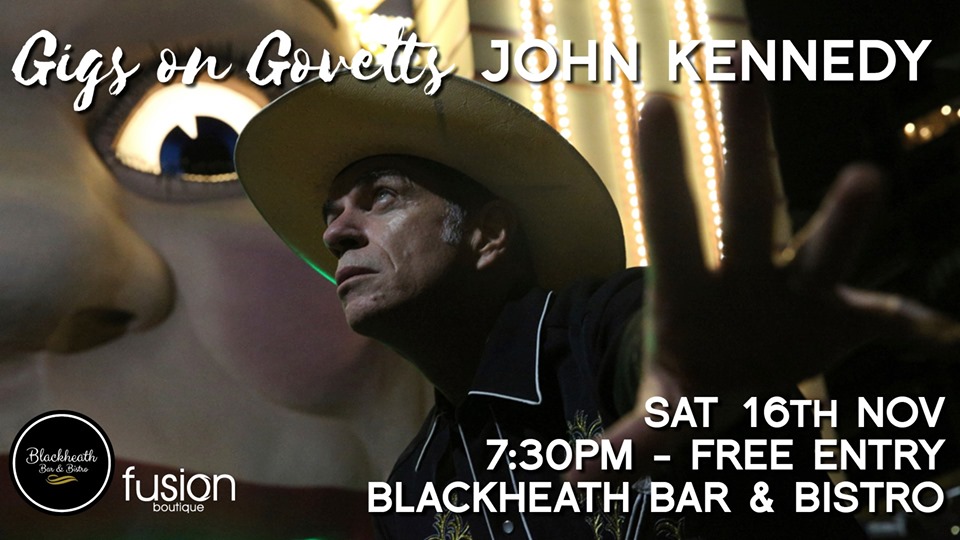 John Kennedy started his music career in Brisbane in the ‘80’s with his band JFK and the Cuban Crisis. He moved to Sydney with the band and had early success with heavy JJJ airplay of indie hits like ‘The Texan Thing’ and ‘The Ballad of Jackie O’. The band broke up and John moved on to a strong solo career with his band John Kennedy’s Love Gone Wrong. More indie hits followed with songs like ‘King Street’ and ‘Miracle (in Marrickville)’ helping define what John called his Urban and Western sound.
Despite topping the Australian Independent Music charts with the ‘Always The Bridegroom’ album, commercial crossover proved to be elusive leading to John’s decision to leave Australia. He spent the ‘90’s living and playing music in Berlin, Hong Kong and London before returning to Sydney in 2000. He formed a new band and continues to perform and produce independent releases with his band John Kennedy’s ‘68 Comeback Special. He is based in his beloved Inner West of Sydney and tours to Brisbane and Melbourne regularly.

John has been very active in the last years with three new album releases. 2017 saw ‘JFK and the Midlife Crisis’ album, a concept album about a middle aged Inner West musician looking back over his life lived to an indie music soundtrack. Last year John released his second best of album called appropriately ‘Second Best’. And this year John and his band brought out a celebration of Australian independent music with covers of songs by the Triffids, Paul Kelly, the Scientists, the Go-Betweens and many others on the ‘Raining Treasure’ album.
John has also played solo acoustic shows throughout his career.

John will perform songs from across his career at his upcoming Blackheath solo show.
Audiences can expect great music and many humorous stories relating to these songs.

Family friendly – minors must be accompanied by a parent or guardian and supervised.
General Admission. Room configuration is a mix of cabaret style tables and chairs and standing.

Fully licensed bar offering a large selection of wines by the glass and bottle as well as craft and tap beers, spirits and signature cocktails.
Full menu is available from midday through till 9pm. A limited bar menu is then offered until closing time.

Bookings are highly recommended. Call 02 4787 5787 or email info@blackheathbarandbistro.com.au to reserve a table. 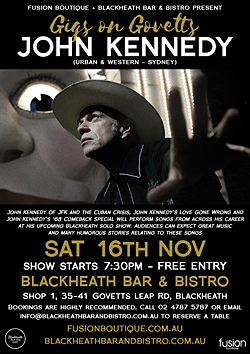