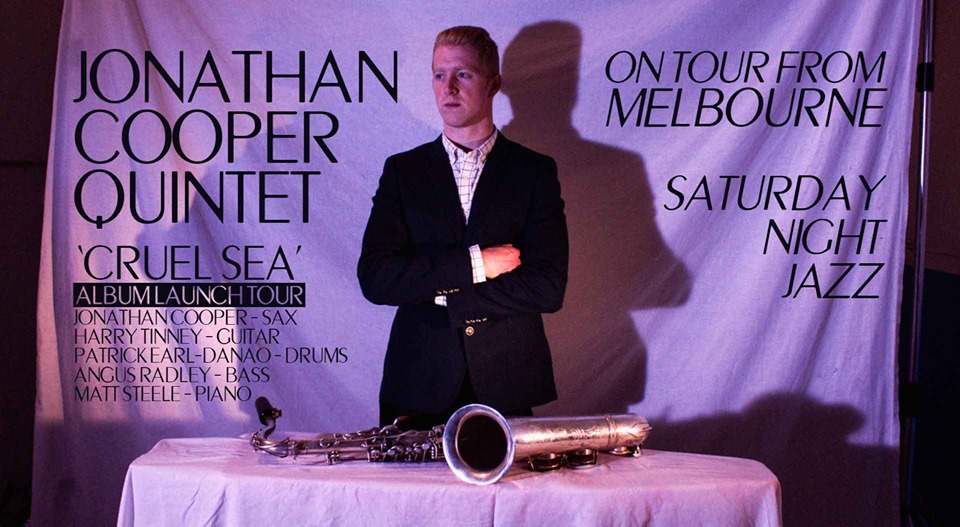 The Jonathan Cooper Quintet was formed to explore the compositions of its leader, saxophonist Jonathan Cooper. These compositions focus upon through-composed, high energy material with a large emphasis upon extended improvisation from all members of the group. Stylistically, the quintet draws upon a diverse range of influences, including impressionist composers Claude Debussy and Maurice Ravel, and Jonathan’s modal jazz heroes Wayne Shorter and John Coltrane. This group recorded Jonathan’s debut album, ‘Cruel Sea’, in February 2019. This album is set for release in July 2019 at the Melbourne International Jazz Festival.

About Jonathan Cooper:
Melbourne-based saxophonist Jonathan Cooper has been playing the saxophone since the age of 12. After falling in love with the music of saxophone titans Sonny Rollins, Joe Henderson, John Coltrane and Pharaoh Sanders, Jonathan studied at the James Morrison Academy of Music, before returning to Melbourne to complete his undergraduate musical studies at the Sir Zelman Cowen School of Music, at which he has received the Monash Jazz Music Scholarship and the Anna Chmiel Travel Scholarship. Jonathan’s career highlights include performances at the Melbourne Jazz Festival with international artists such as Tomasz Stanko, Carla Bley, Ben Monder and Terri Lyne Carrington, and performances with leading Australian musicians such as Paul Grabowsky, Mike Nock and Scott Tinkler. In 2019, Jonathan was a finalist in the Australian Future Jazz Leaders and recorded his debut album ‘Cruel Sea’. This album is set for release in July 2019 with Static Records.

“Jonathan Cooper proves his position as a player of international stature…in the fierce music that follows in Cruel Sea.” – Bev Stapleton, All About Jazz

“Cruel Sea is a triumphant outing for Cooper which is well worth your attention” – PBS 106.7 FM

Join Jonathan and the gang this Saturday Night, 6:30-8:30 pm. Come along early if you want a seat as it’s first come, first served. Bar & Kitchen open, family-friendly, free event. Live music @ Hotel Blue is brought to you by ‘Music in the Mountains’.