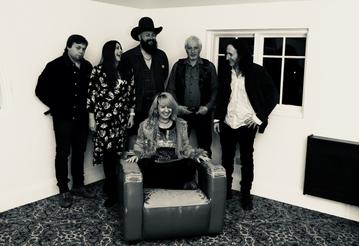 Hat Fitz & Cara’s musical style is a unique combination of folk, roots and gospel blues with old time flavourings reminiscent of a time once forgotten.

Linda Mizzi is a singer songwriter based in Katoomba NSW in the Blue Mountains. Seamlessly blending folk, jazz and blues, she draws on influences as diverse as Rickie Lee Jones, Patty Griffin, Lucinda Williams and Doris Day! Much to the delight of some, Linda refuses to fit comfortably into any one musical niche – instead weaves all her musical influences – along with life experiences, melodies and lyrics into her songs.

She is joined by band members; Alexander Keller on bass guitar, Stefano Cosentino on lead guitar, Ian Neil Morrison on drums and percussion, Sonja Keller on violin, and Simon Crosbie on harmonica.

Linda’s new album titled REAL PEOPLEwas released in May 2018 – and launched at three separate venues in NSW and the ACT.  Please see further on in the website for reviews.